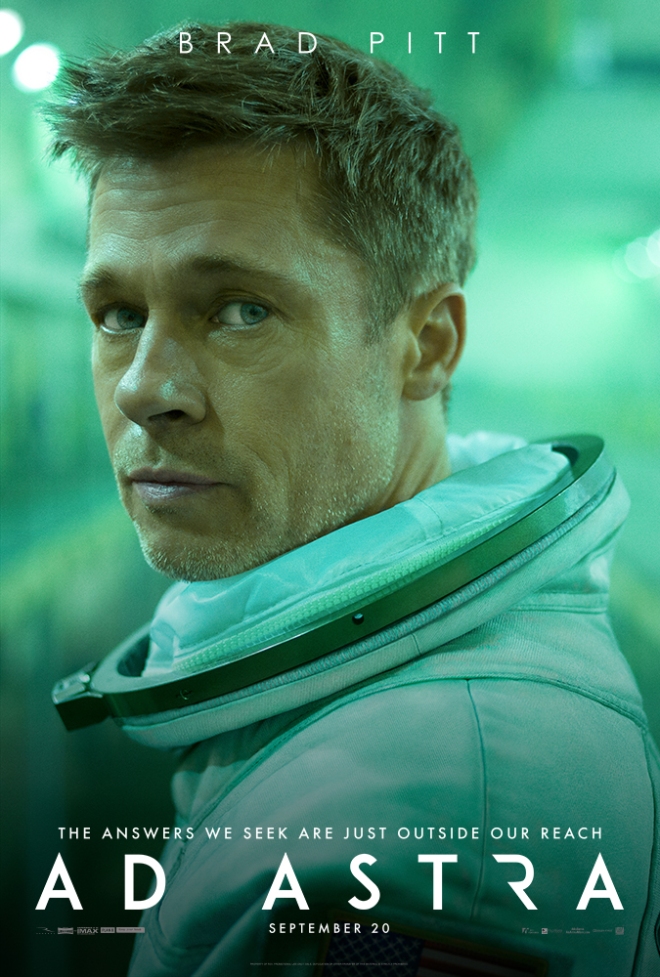 What do you get if you mix “2001: A Space Odyssey” with “Apocalypse Now,” and add a dash or two of “Event Horizon?” If you get the chance – see “Ad Astra” in an IMAX cinema. It looks and sounds beautiful. I thought the IMAX cinema format really let James Gray’s work shine.

In many ways, the film’s narrative is understated, mundane even. Yet all the while, Gray’s visual and audio spectacle pulls vigorously against a slower plot. This gives the film a slightly odd unbalanced feel. But – it’s not an unpleasant one. It elevates the experience, and – I think it works with the overall theme of the movie. Brad Pitt gives voice to this theme during the third act of the story, when he describes the choices and actions of another character. He says something like, “He had it all looking him in the face, but he missed the significance of it all.”

If you have picked up that “Ad Astra” is a father – son story, then you have heard right. It is. But there’s a bigger issue that is also raised here. I don’t think it spoils the movie to reveal this. Apologies if you’ve seen the film and you disagree with me. I’ll describe the issue this way:

What if the earth (our beautiful marble) and our human race is actually the only source of conscious life in the whole universe? What if we are alone in this vast expanse? What if we’ve got each other, and that’s it? The title of this movie is Latin for the phrase, “To the Stars.” Ad Astra. Well, once you’ve been to the stars and comprehended their beauty, what if you need to come home again to find someone to describe your experiences to? What if there is no extra-terrestrial life waiting out there for us to contact?

And someone groans at the thought. “How can this universe be so vast, and yet there NOT be life on many other planets? Are you saying we are somehow privileged, living here on this unremarkable spot in our galaxy? That doesn’t seem likely.” Really? Why don’t you think that’s likely?

Look at it this way. Imagine you have to bake a cake for your mother’s birthday. But, before you start, there’s a rule you must follow. You are not allowed to buy any ingredients at the store. None. Instead, you must grow everything from scratch that will eventually be used to make the cake! What might that mean? Well – as my wife will tell you, my presence in the kitchen is usually a sign that I’m hungry, not that I’m making anything. I’m no cook. But I do know that to make a cake, you need at the very least milk, eggs, flour, sugar and jam. Probably chocolate too. If you cannot buy your ingredients…how are you going to come upon them?

Well – milk comes from cows. So – you are going to have to set aside a substantial area of farm land to raise a heard of cows. You will need enough farm land to raise and nurture them. And you will also need to grow enough crops to feed them. You are doing all of this work so that they will eventually produce milk for you. How about the eggs? Well – you are going to need to raise chickens for eggs. Right? And flour? You get where I’m going now. You need to plant a field of wheat which you will eventually harvest so that you can process the resulting grain to produce the flour. You’re also going to have to grow sugar cane, fruit trees… and you need space to process and refine them all. The list of preparatory steps goes on….and must all be done before anything starts on the cake.

You will bake your cake in a small kitchen. But the production of the raw materials FOR your cake will take an extremely vast area of farmland dedicated to livestock, wheat and fruit production. And these raw materials won’t appear quickly. It’s going to take time to grow them to the appropriate stage of development, so that you can take more time in converting them into the raw materials for your cake. Little kitchen…massive farm land to produce your ingredients.

What has this to do with Ad Astra?

Well – this movie works hard to show us an artistic impression of the glorious and beautiful universe we inhabit. What if its that big and beautiful…just for us? As I’m watching the story unfold, I’m suddenly left feeling very alone. Like I’m watching our characters pick their way thru lonely farmland that exists to service a busy kitchen. What if our vast universe is actually that size and this composition, just so that life can be constructed and deposited on a particular planet which is specially prepared for it? What if the age of our universe is right for the production of life on the earth during this specific time period? That there are just enough stars that have cooked the elements…raw materials that human and animal bodies are composed of? Our universe is big and old…because it grew and prepared all the stuff that our world, and we are composed of. Like the farmland outside a small kitchen.

It’s a thought. And it doesn’t take away from the visual splendour of our universe, particularly as its depicted in Ad Astra. You could argue, it makes our universe all the more sweet. Because as we view it, we do so from the only place that is made specially for our protection and safety now. Home, planet earth. Surely, a privileged planet? James Gray does a masterful job of positing this idea, I think. Yet he does so thru the lens of an intensely personal story. One that I think may stay with you once your memory of this visual and audio feast has faded.