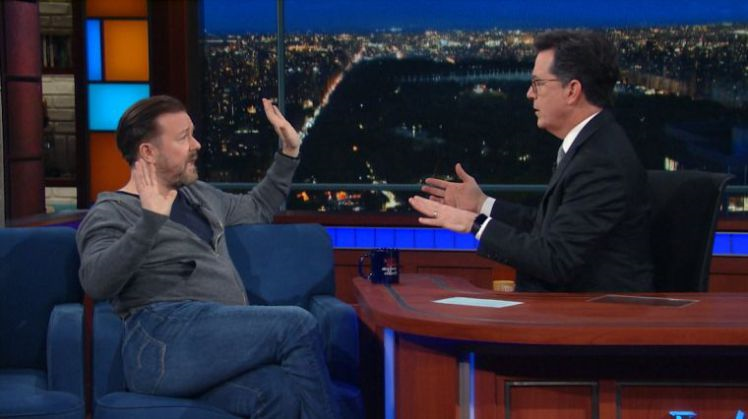 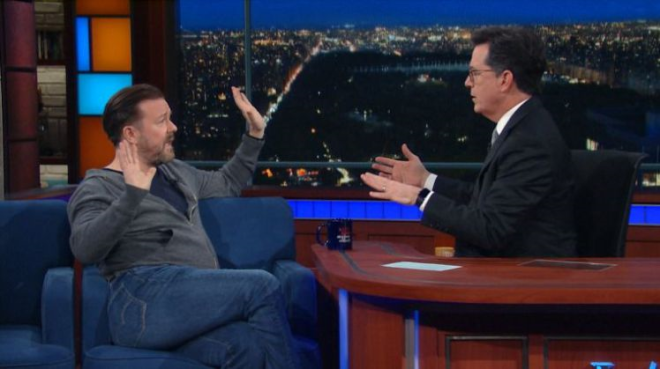 I found this discussion on prime time US TV to be pretty fascinating! I’m always pleased to see when discussion about God comes out of the private places and into the public square where it belongs.

Ricky’s a sharp and witty comedian…and I do enjoy his irreverent humor. But I honestly find his atheism troubling. Not because I find his arguments compelling…its just the way he immediately seems closed to the idea of God.

I thought Colbert asked a great question out of the gate on his show…and he let Ricky off very lightly by allowing him to sidestep his good question.

Why is there something instead of nothing?

Why does the universe exist at all? Why are we here?

“That makes no sense at all…surely the bigger question is not why, but how?”

First – Ricky’s saying first that the question makes no sense. Sure it does. The sentence conforms to the laws of English grammar and syntax. But that’s not what he means. What he means is that naturalism and his materialistic worldview has no good answer to the question “why”. And so rather than admit that, he moves the discussion to “how”. Interesting sleight of hand. But it seems to me that it would have been more honest to admit that he has no answer to the question “why”.

Second – he says that the bigger question is not why, but how. Of course…Ricky thinks he’s on solid ground now about the “how” because…well…science. He can engage on that topic because of the great work in cosmology, biology, etc. But is he right? Is “how” a bigger question? I personally don’t think so.

Personally – I’m of the opinion that BOTH the “why” AND the “how” are important questions. And rather than dodge them…we need to work on them. Maybe we don’t have all the answers yet – which is why we are working on them. David Robertson makes an interesting point,

“Don’t be so dismissive of the very questions that make us human.   Humans are the only animal who ask the why question.  Please don’t dehumanise us.”[1]

Too right – you are worth more than that, Ricky.

I also love the part in the interview when Ricky says,

“Can you prove there is a God? You say no. So I don’t believe you.”

I’ve hit this so many times myself. And it’s like…we are stuck together in this odd discussion on proof for God…with the definition of the word “prove” getting tougher and tougher by the second. Yet there are so many things in life that we naturally accept, even though there is no empirical, cast iron proof of them.

BUT – is there EVIDENCE for God. Now – that’s a whole different question. Of course there is evidence that points towards the existence of God. For example…

And yet…again as Robertson points out about Ricky,

“you have already pre-determined that there can be no such evidence and therefore you automatically dismiss or explain away any such evidence.”[2]

Isn’t that the truth. We come back to what is permitted or allowed by the atheist belief system. Robertson engages with many more of Ricky’s points during this brief exchange…it worth taking a read of his blog.