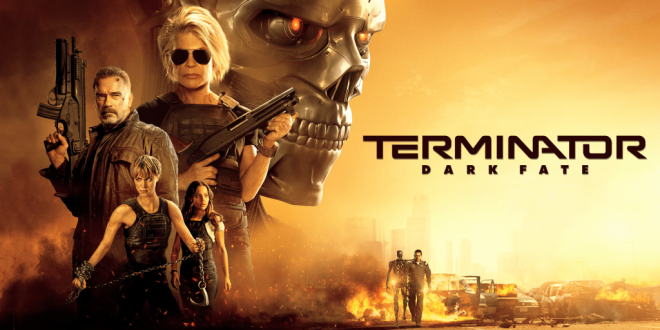 The latest Terminator movie has stumbled at the box office. I feel that’s unfortunate because this was a genuinely fresh and interesting take on a well established story. What interested me was the philosophical article I read about it in the Hollywood Reporter.

The Hollywood Reporter suggests that, perhaps people just don’t see AI as the enemy any more? Rather, we see machines in more positive terms, convinced by the idea of a future personhood owned by machines. Yet Dark Fate tries to observe the psychological difference between man and machine. “Humans are uniquely alive compared to artificially intelligent beings because we are fated to death and decay in ways machines are not.”[1] There is a character called Grace who is part human and part machine, yet she is psychologically on the human side of the conflict. In comparison, the antagonist is a highly dangerous Rev-9 model Terminator which mimics humanity simply to make it a more efficient killing machine. This is a familiar story beat. Schwarzenegger’s Terminator in this movie has tried to emulate humanity for more positive and life giving reasons. Yet both of these machine Terminators are simply machines, unable to achieve personhood. Arnie’s Terminator “appreciates humanity and strives toward personhood, but can’t fully achieve it.”[2] So in this movie we see the full spread – human, part human and machine. The inhumanity and non-personhood is always located on the machine side. Perhaps people don’t resonate with this idea so much anymore? Perhaps “the generation raised on Wall-E is entering adulthood just as regarding robots as people becomes the onscreen norm.”[3]

If you think about it, Western society is increasingly of the opinion that people are simply biological mechanisms. There’s no soul, no spirit, just physical. We live, we break down and we die. And death is that cessation of functionality that no one in Western society likes thinking or talking about. Given that understanding of humanity, it makes sense that robots would be seen closer to us than ever before. Why do we have to portray conscious robots as the enemy, when it makes more sense to imagine that they would be our friends?

It’s a fascinating observation and – the Reporter might have a great point. But because society gathers around the idea of future, conscious AI, does not make that idea either credible or likely. Fictional stories are important, we learn a lot about ourselves and our personal development through myth and fairy-tale. Fictional stories can also lead to breakthrus in science. But sometimes the fictional idea is just going to remain a fictional idea. I think conscious, thinking and creative AI is one of those fun yet solid fictions. It doesn’t detract from my enjoyment of Terminator Dark Fate, but I’m increasingly convinced that genuinely conscious, thinking machines are impossible.

1 – We project our capacity for conscious thinking onto today’s AI.

It’s a way we use language and it would be misleading to someone who knows nothing about computers. AI is a cool gadget that makes my life better (self-driving car). Yet our AI of today is purely functional, following an algorithm and incapable of thinking about whether or not it wants to. It is a mechanism designed to emulate a human (hello Siri).

2 – We are always going to be superior to AI.

Machines may be faster and stronger than us, but we have ontological superiority. We are the ones designing and thinking here. When machines do cool things, they don’t get the praise. We do. The designers. We may not even have a metaphysical property that allows us to create thinking, creative  machines that can reproduce themselves.

3 – We are conscious, but we do not understand what that means.

4 – Humans are of a Different Order than Machines.

Yes, we have a physical make up and the closer we look at it, the intricacy of biological mechanism is seen. But – we are of a different order to machines. Likening machines to humans is, in a real sense, comparing apples and oranges.

Whoever we are, we have the ability to navigate our way through life, following our own thoughts and ideas and intentions. We create opportunities and respond to events that occur from our own rational, creative and conscious selves. We have general intelligence. We live in our environment and we cope within it, we adjust. We establish a social network, we conduct our lives appropriately.

Machines are different order from us. They lack this general rationality. We give them rules to follow and they don’t think about it, they just do it. We are simply of a different order from them. We can build them to mimic human characteristics, but they are not thinking as they do so. They are simply following the instructions we programmed them with.

Yes, we are going to get better at making machines mimic human behaviour. But – I don’t think we will ever see a genuinely conscious machine. Terminator Dark Fate understands the ontological differences between us. And I think there is an important reason for doing that. Realising that we are more than biological machines is important for the future of humanity. It is a life giving perspective. As Arnie once said – “Come with me if you want to live.”