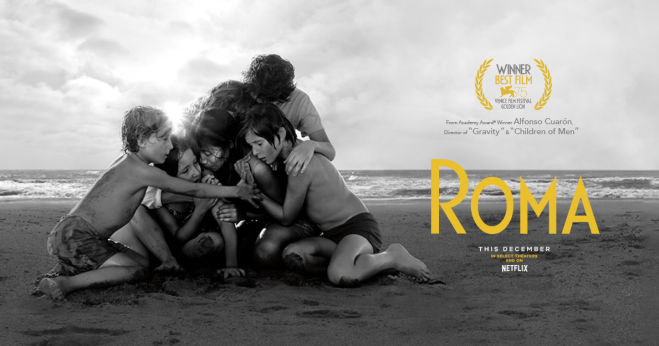 Alfonso Cauron’s latest movie has received a limited theatrical release, which sounds like a tragedy given the quality of his past output. Yet it has also been streaming on Netflix since December, so it’s available pretty much everywhere. Cauron is telling a fictional story through a period of history he himself knows. He grew up in Mexico City in the early 1970s, and he chooses to set his story here in painstaking historical detail. His vivid  backdrop is a period of great Mexican societal unrest following government atrocities of the 1960s and early 70s.

The themes of racism and inequality bubble beneath the surface of this story. Cleo is from an indigenous family who comes to the city to work as a maid for a wealthy white family. As her story unfolds we see that, even though she serves this family, she is the same as them. Even though she is financially poor, the problems in her life mirror those in their wealthy life.

As you let Roma wash over you…I think the movie is saying that life in all its vividness and grounded-ness is a real leveller. Everyone goes through similar experiences. Loss and suffering is no respecter of persons. We all hit it at some point. Including the experience of regret, of guilt.

A lot has been written about Cauron’s technical prowess that’s visible in Roma. But what struck me (I’m not a filmmaker) was the honesty displayed in his movie. He is taking a long hard look at human nature in all of its depth, and unflinchingly showing it on the screen. From the selfishness of Cleo’s partner to the selflessness of Cleo herself, I was left feeling that I’d really experienced life as the credits finally rolled. Cauron had almost given me the unique experience of actually living someone else’s life…and feeling what she felt and learning what she learned. What a gift!!

There is something about Cleo’s character that draws you. I think it might show some important aspects of humanity…of living as we are supposed to live. Imperfect yes…but yet it comes through her life and choices. Thru Cleo’s eyes, we are a person of humility, who values those around us and persists in thinking the best of them…even when they mistreat us. Of doggedly carrying on, even when the odds are stacked against us and we’ve got many reasons to give up and try something else. And – even though society around her is collapsing into violence – Cleo continues prioritising the important people in her life. She isn’t distracted from knowing what the right thing is…and continuing to do it.

I think the feel and the smell of Roma stays with you afterwards…because in many ways we’re struck by Cleo as an inspiring role model…a hero for our troubled times. She isn’t presented with all the flash and pizzazz served up by the next Marvel superhero film. She’s not Captain America. But – in a sense – she’s a real hero. The person we would want to be if we faced those sorts of troubles.

The thing is…we are facing these sorts of troubles today. Culture is under attack right now. In Britain…Brexit is threatening to drag us down into a whirlpool of dread and uncertainty. And across the pond…the horror of US Government shutdown and the resulting economic deprivation…all for the sake of a questionable (un) Presidential project…leaves you wondering whether anyone really cares selflessly about anyone anymore? It leaves you feeling like everyone is just on a short fuse…ready and willing to explode in exasperated outrage any minute.

Our world needs people who nevertheless… prioritise the feelings and needs of others. Even though they are in the minority as they do so.

In Roma, this is what Cleo is doing. I think she consciously or unconsciously tries to live out the call of Jesus Christ to “do to others whatever you would like them to do to you.”[1] We see it in her patience with her abusers, and her loyalty to her suffering family.  There’s a clear attractiveness to living life this way. It’s a principle and philosophy which underpins God’s idea of what positive and healthy relationships could be like. Cleo shows us that…living this is not a soft option. Its not easy to live this way in the midst of a society that is embattled, angry and just doesn’t value you that way.

And yet…the results of persisting in living this way are so valuable. It results in a life of belonging, of family, and of facing the future together with those who love you. If our society is going to survive…it will do so in this way. So…we need to start living this way. Doing the right thing anyway, even though so many don’t. Live like Cleo, do to others as you’d like them to do to you.