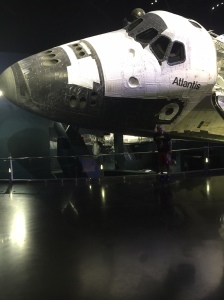 I had the amazing privilege recently of visiting Kennedy Space Centre in Florida. It wasn’t my first visit – I’ve been there a few times before. What I discover each time – is how much there is to learn. So much to discover about what the United States of America has accomplished in space exploration (which is just awe inspiring). How mind boggling our Universe is. It is staggering, breath taking. And frankly – I drive my wife nuts talking about it after we have been there!

When you visit Kennedy today, you have the opportunity to visit the centrepiece of American…and frankly human…genius. The Space Shuttle. There’s a visitor complex housing this beautiful machine. And I defy anyone not to walk thru the whole experience…and not have to blink back a few tears in the process. (ok – maybe not my wife).

The Space Shuttle Atlantis is beautiful. Why do I say that? Well – it’s not just how it looks…which is kind of functional and quite familiar to those of us who have grown up in the late 20th century. She is beautiful because…when you stand beside her and gaze at her…you are looking at a machine that has survived the incredible rigors of leaving the surface of this planet…and roaring round it in orbit at thousands of miles an hour. Many many times. And if that feat was not enough – she has safely carried scientists and engineers who have taken the opportunity she has given them to do incredible work. Conducting scientific experiments that help us understand the nature of the universe, building the International Space Station in orbit at hundreds of miles an hour…the list goes on. And after each trip…she returns…is retooled…and off she goes again.

When you stand and look at Atlantis, you are looking at a vehicle that has enabled human beings to achieve wonderful things. And – personally – I found the experience profoundly moving. Also – the tour guide (who is a retired scientist who used to work at Kennedy on the Shuttle program) couldn’t get rid of me. I stood talking to him for AGES.

One of the founding fathers of science – Francis Bacon – said this three hundred years ago.

“God has, in fact, written two books, not just one. Of course, we are all familiar with the first book he wrote, namely Scripture. But he has written a second book called creation.” – Francis Bacon

It is a tragedy that so many people today have given up on the Scripture that Bacon’s generation knew so well…and instead focus solely on the book of creation. As we have done so…we have lost balance. We have gotten it into our heads that creation is all that there is. There is no creator. There is no purpose. What we see in our Universe just is. Well – I’m not surprised that our culture has ended up in that odd unbalanced place…because we’ve rejected one of God’s books in favour of the other.

The tragedy of giving up on Scripture…God’s words to mankind…is immense. I can only touch the tip of the problem here. Studying creation using the tools of Science gives us an understanding of function and construction in nature. Scripture on the other hand reveals to us purpose and destiny and hope. It is a grim task indeed to resort only to function and to lose the perspective that Scripture brings. Yet that is where Western culture sits to a large degree today. And we are poorer for it.

Space exploration is such an exciting aspect of human discovery and investigation. And I think God probably gives us a mandate in Scripture to do it. At the risk of sounding bonkers…of course it doesn’t mention the Space Shuttle or the new American Orion program directly in the Bible (!). The Chinese, the Russians…even India is exploring space today. I’m not crazily claiming that the Bible predicts this in some strange way. So what am I saying?

The Bible is a book of its time, written millennia ago. Yet it is not JUST a product of its time. It contains timeless truths from the heart of God himself. It talks in wondrous terms about the Universe that human beings occupy. Here’s a taste…hinting at gravity and the orbits of planets and stars.

“Can you direct the movement of the stars— binding the cluster of the Pleiades or loosening the cords of Orion?” Job 38:31, NLT

But it goes further. I think it reveals evidence that God has designed people with an ability and a passion to study, to explore…and to do science in our Universe. How so? Well, look a bit deeper. In Genesis chapter 2, we read this:

“So the Lord God formed from the ground all the wild animals and all the birds of the sky. He brought them to the man[c] to see what he would call them, and the man chose a name for each one.” Genesis 2:19, NLT

Having created the Universe and the life forms living in it…God brings them to the man “to see what he could call them”. Why would God do that? Why would he do this at such an early and formative stage of mankind’s history? Perhaps because God wants us to know how fun and exciting it is to discover new things and give them names?

Sometimes we need to physically go and explore…and sometimes this involves leaving the confines of the planet. I think we have some evidence that God wants people to study His creation, it delights him when we do it! It is an act of worship to do so…even though many people would scoff at this notion. When we study creation, whether its animals in the rainforests, or mathematical formulae speculating about the earliest moments of the Big Bang, or looking at distant galaxies thru the Hubble Space Telescope placed in orbit by the Shuttle…surely we are doing what God loves for us to do? To investigate and to study our Universe.

You know what? There are many scientists, explorers and adventurers today who have not abandoned the book of scripture that Francis Bacon talked about. They hold scripture and creation together. They know it pleases the heart of God when we learn more about what He’s made.

Rick Husband was one of them. He worked for NASA as the Commander of Mission STS-107. His space ship? The Space Shuttle Columbia that tragically broke up during the rigors of re-entry into Earth’s atmosphere in 2003. Rick’s family have kindly donated some of his most precious possessions to the Kennedy Space Centre. And they are displayed close to Atlantis in a memorial exhibit which remembers both the crews who were lost. Challenger and Columbia. Among Rick’s possessions…his cowboy boots and his Bible…opened to an important page. A page that talks about the benefits of wisdom. Showing the verse he had carefully underlined before his death. 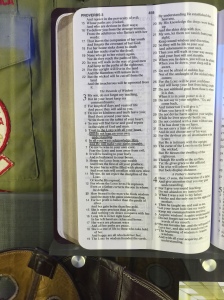 “Trust in the Lord with all your heart. And do not lean on your own understanding. In all your ways acknowledge Him, And He will make your paths straight.” Proverbs 3:5-6

Surely Rick’s is the heart of the true explorer. Who longs to learn and discover just how wonderful our Universe is. Who does so holding the hand of the God who is leading him safely to his destination.